I haven't taken much to reviewing products on this site, as I figured it might infringe on my "no negativity" rule. Additionally, I felt my experience in the sport had yet to merit any credibility on any particular subject. I then realized that this is a blog, after all, and any opinions which are expressed here are well worth the paper they're printed on (which is none because, well, no "paper". Only the electric ether of the internets). In all seriousness though, after a few races under my belt, I'm beginning see what works for me and what doesn't. Thus I am choosing to not necessarily "review" products, but instead just write about stuff I like.

Now, just because I don't review a product doesn't mean I don't like it. In fact, the lack of a feature here could mean a lot of things (such as power meters not being part of my regular training, or a piece of equipment being far to expensive, or I just didn't get off my lazy butt to write about it). But just know that it's not a critique or endorsement of that product.

Well that was all useless information. Now on to the review... er... "feature".

There are a variety of accessories which, outside of any variable conditions, can provide free speed and performance on a bike, and depending on who you talk to, each may have more benefit than another. In no necessary order (and I stress that to avoid involving myself in the endless debate of what will best improve bike performance) they are the engine* (in other words you), the bike frame, the bike fit, the clothing, the helmet, and of course the wheels. I've put an asterisk next to the engine because that is the number one thing a cyclist can change to improve performance. Even if you add all the other bells and whistles, your bike will still just be sitting in your garage. Improving the efficiency of the rider will be the best way to improve how fast, how far, and how long you can ride.

That said, today we will be discussing the wheels. For all of my races leading up to the Ironman Los Cabos, I had been racing on Fulcrom Racing 7 wheels, which were essentially the stock wheels that came with the bike. This is not to say that they were poor wheels. In fact, I have been using them for over a year in training and racing with a great result. However, wheels traditionally associated with racing have specific advantages I wasn't benefiting from. The main difference is the design of the wheel, which improves the aerodynamics of the ride. The carbon fiber fairings (which are what make the rims look super thick) act almost like a sail in the wind. Instead of wind just going through the wheel, it would catch the fairing and help reduce drag and propel it forward. With the consideration above that I could buy some free speed by purchasing new wheels, I was interested in seeing my options.

The key phrase there is "buy". Turns out this speed was not free after all. If fact it was expensive speed. Very expensive speed. Many of the wheels that offered an aerodynamic advantage were well over $2,000 for a set! Some were more than I paid for my bike. Discouraged, I gave up on my search and came to terms that I would make do with racing the wheels I had. Until I began hearing the buzz about Flo Cycling. I will spare the details of the company (you can view their site for more information), but I had seen through various websites that this small startup company wanted to satisfy a niche in the marketplace to provide aerodynamic wheels at an affordable price. Many of the reviews were very positive, and the price point was 1/3 of the price of the major competitors.

Because the wheels are inexpensive, and because the company is still relatively small, they have an order once a month or so, and the wheels sell out within an hour, depending on the wheel set. The prospect of having a great racing wheel set for a fraction of the price of regular wheels led me to pull the trigger on the Flo 60/Flo 90 combo, a popular combination with a 60 mm faring in front and a 90 mm faring in the rear. At the very least if I wasn't happy with the wheels, I could very easily sell them on ebay or craigslist without much of a loss. In fact, I checked ebay for Flo wheels for sale and found very few results. Those I did find were very close to, if not exactly, the selling price. Another good sign.

I've heard a number of complaints about the ordering process. Since they are flooded with orders over a short period of time, things tend to get "stuck", and people miss out. Fortunately, I didn't have any of these problems. Within a couple minutes I had the Flo 60 and Flo 90 in my cart and had made the purchase. Because the inventory for disc wheels is much less and the demand high, these wheels sell out much more quickly.

I received my wheels about a month before Ironman Los Cabos, which gave me a chance to ride them on a few training rides. Unfortunately, I have nothing to compare them to except the Fulcrum 7's, since this was my first experience with aero wheels. The first ride was a little wobbly at first which had me nervous. It was a windy day, but Cabo would be windy as well. I would venture to say that this wobble factor in gusty wind exists for all aero wheels since their surface areas are similar. However, after a dozen or so miles, I became accustomed to it. The noticeable difference is that upon accelerating on the flats and downhills I could easily maintain higher speeds at less power output. It felt as though the high winds were propelling me forward. On the hills I didn't notice a significant difference from the Fulcrums since they are approximately the same weight. However, once over the peak of the hill the wheels seemed to want to scream. The noise is loud as the air passes through the hollow fairings, but it sounds fast, so that's good! 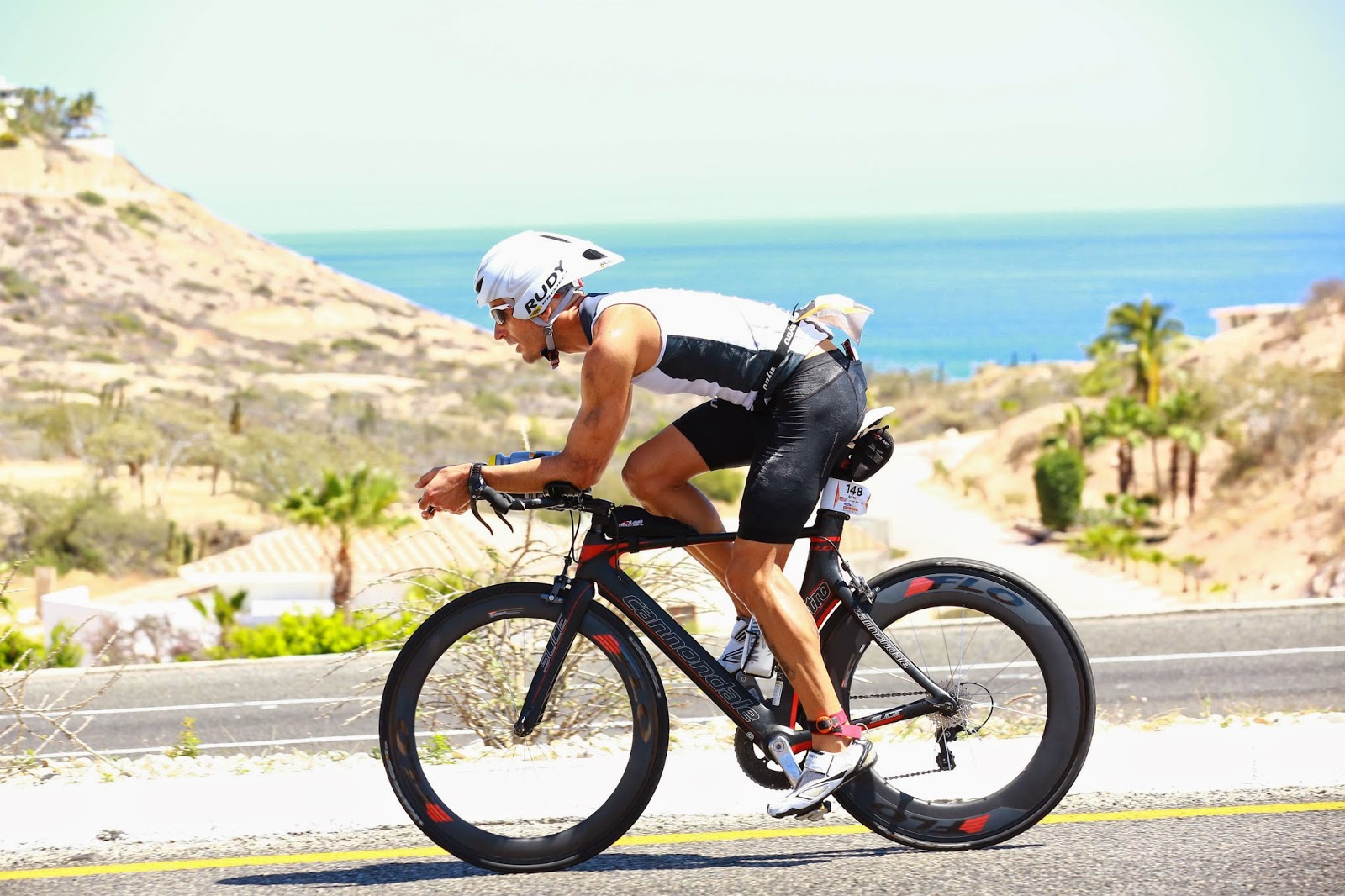 Ironman Los Cabos was the true test for these wheels (and myself for that matter). It would be the first time doing a long distance ride on these tires, the first time with this level of climbing, and the first time having to run a marathon after riding on them. I have to say that these wheels performed like a charm. The relentless climbing that was the bane of many racers that day seemed comparatively effortless on the Flo wheels. And once hitting the downhills the bike seemed hungry for acceleration. But it was in the crosswinds where these wheels excelled. I had a lot of concerns coming into the race about the winds being a major factor. During training rides my pace would slow dramatically in head or cross winds. In this race I barely felt them, and they only minimally affected my pace. Certainly not to the extent that they did in training rides.

Important too was that off the bike I felt fresh and ready to run, as opposed to training where I had felt fatigued during my longer 5-7 hour rides.

I averaged about 20 mph on the bike, but to compare that pace to any of my other races would be like comparing apples to screwdrivers. I went faster in my half in palm springs, but that was a completely flat course without the heat and only half the distance. The most important thing here is that I felt faster and fresher on these wheels. In a race where how you feel can be the difference between a PR and a DNF, perceived effort can be the most important measure you have. Because the ride feels effortless and fast on these wheels, it gives me all the confidence to race strong.

One further endorsement for these wheels is the service. The owners of this company have a genuine interest in the service they provide. They take a very personal approach to their customers, often responding directly to customer inquiries personally, involving themselves on multiple online forums, and providing ample technical support via their website, YouTube, etc.

Did I mention the price? Well if I forgot, you can get into a pair of these wheels for a small fraction of the price of even second hand race wheels. In fact, it is likely that you can get a set of Flo 30's (training wheels), a set of Flo 60's or 90's, and a disk for less than the price of a set of competitive racing wheels. How do they perform against those competitive race wheels? I don't know, but I will say the risk/reward is much better for the consumer than many of the other wheels on the market. And if at the very least I'm not paying for free speed but for improved feel, then I would say that the product is well worth the price of admission.