This week is a "mini-taper" training week, since tomorrow is my first race this year (OC Half Marathon), which I am running with my wife. This "mini-taper" has been a bit of a welcome relief to the training volume I have put in recently, as I have been able to sleep in a bit, and my butt doesn't hurt from miles on the bike. Being that this first race will be the first opportunity to test my speed, I thought this would be a good opportunity to discuss how I train and how I feel about it.

I've only done two half marathons in the past (both in Huntington Beach, in 2007 and 2012). The training plan I had for the first was very simple. Run as frequently as I could, as fast as I could, for as long as I could. Needless to say this was very exhausting. I was always tired, and always dealing with some type of injury such as shin splints, knee pain, back pain, headaches, etc. However, that's how I understood the training to be working. After all, no pain, no gain, right? It certainly didn't seem "fun", but to some extent it worked. It got me to the finish line in a time of 1:52. About an 8:30 pace or so.

The training for the second race became a little more complex. While I was still running as frequently as I could, as fast as I could, for as long as I could, I added a little "doughnut on the baseball bat" so to speak. I was drinking a lot during this time and was often hungover. Apparently I am a glutton for many things, including punishment. By the time of the race I was about three weeks sober, and pulled of a time of 1:51, beating my previous time by a minute. It appears that to some extent this training worked as well.

But obviously it didn't work at helping me achieve optimal health. While I finished both times at a kind of middle of the pack pace, I certainly wasn't well. I was constantly injured, tired, and unmotivated. I remember yawning all the time, which was a real joy for those trying to hold a conversation with me. I'm sure many can relate to this feeling to some extent, as it seems like the traditional perception of what exercise is supposed to be involves beating ourselves up as much as possible to make ourselves "stronger".

This time around I was more or less forced into a slow and steady approach, as it was doctor's orders to take it easy post surgery. I also started to approach running to a more spiritual experience, as something that strengthened mind, body, and soul. I noticed after a few weeks I was feeling better than I ever had, and had much more energy. I started reading and studying more on how to train for endurance and came across a lot of literature on training aerobically (within specific heart rate ranges).

Phil Maffetone has an approach to finding your maximum aerobic heart rate for training, which has been used by many professional triathletes over the last 30 years. It is suggested that most, if not all, training should be done at no higher than a person's maximum aerobic heart rate (his book, The Big Book of Endurance Training and Racing, is very informative). I won't go into the physiology of it, but the theory is that the more you train at this heart rate without exceeding it, the better your slow fat burning mechanism becomes (vs. your fast carb burning mechanism). Because you can burn your stores of fat for longer than you can burn carbohydrates, your endurance increases substantially as you spend more time in the "fat burning" zone. The trick is training your body to burn more fat as fuel, which means slowing down.

For me, because I had conditioned myself to train hard and fast without consideration for biofeedback, at any indication of increased activity, my brain would tell my heart to go bananas. And bananas it would go. It's no wonder I was always tired, injured, and full of anxiety. I've recently determined my maximum aerobic heart rate to be 142 (which is 180 minus my age, minus a few more beats for being injured - a calculation based on Maffetone's recommendation).

So instead of making the pace the constant in my training, I made heart rate a constant. The other constant that was changed was distance and time. Instead of distance being constant ("I'm going to run 5 miles today), time became the constant ("I'm going to run 1 hour today"). Psychologically this sounds much better since exercising for an hour sounds more appealing than running 5 miles. In theory this makes for much more efficient training as you are relying on biofeedback, and one can build up endurance by adding time each week. Since pace and distance are now variable, I can better judge what my body is telling me based on how those variables trend.

This is a frustrating undertaking at first, but one that I found was exceptionally freeing as I learned to let go of control, and allow myself to be humble, patient, and accepting. I was initially forced to take on an 11-12 min/mile pace in order to keep my heart rate at 142, and I didn't feel like I was accomplishing anything. Nor was I breaking a sweat or breathing hard at all. As I said, my heart was conditioned to blow up at any hint of activity. I could swear I heard "pick it up, wuss!" as an elderly woman passed me with her walker.

Nonetheless, I was beginning to yawn less and less, I began thinking more clearly, and I was happier and less worried about everything. I am also burning more fat and avoiding injuries. The idea of being humble, patient, and accepting in my workouts began to translate into the rest of my life. Where I placed my ego on the shelf a few months ago, I now buried it in a box and put it in public storage. Below are the results of three runs I performed within one month of each other. I logged the splits for each mile of each run and recorded them to track progress (The "MAF" in MAF test stands for maximum aerobic function). All these miles were done at or within 2 beats of 142. 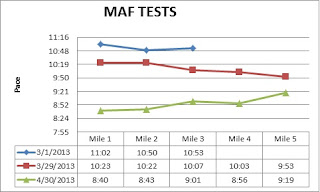 As the results stand now, I am very near my previous half marathon paces. While one can argue that that in and of itself doesn't prove that I am any more fit than I was at my two previous attempts since I am not any faster, I would argue that these paces now come with very little effort. Since I have held heart rate constant, my perceived effort is still very low even as the pace has improved.

I've learned that this is "real" training. A switch has flipped and I'm pretty well convinced that this is an effective way to improve the health of the mind, body, and soul, regardless of how the race results turn out. I am unsure what to expect tomorrow as I race my third half marathon. While my training is done at 142 heart rate, racing can be done at higher heart rates. My goal is to follow the 1:45 pace group as much as possible and see how I do. If I can pass them and still feel good, I will. If I fall back and finish behind my previous finishes, that's fine too. I'm still in training and have a long way to go, but at least now I feel happy, healthy, and closer to God. As long as those are the results, that will continue to be my training. That's a win in my book.
Posted by Unknown at 6:31 PM