My training is starting to get longer, I'm in the middle of my first racing season which is going much better than expected, and I'm beginning to "feel" like I can actually compete in, not just finish, this Ironman event. However, despite the obvious upswing in the positives, it's far to easy to get caught up in all of it and let my ego and pride take hold. There is an event horizon at which point I cross my competitive spirit becomes greater than the purpose for which I am doing all of this.

My goal is to become healthy, fit, joyous, and free. To hopefully benefit others, and show that hope can overcome hopelessness through moving beyond fear and significant obstacles. I can not achieve this if my primary goal becomes to win simply for the sake of winning. "Winning" can be defined in many ways, and I want to continue to define it not by crossing the finish line first (although that is always a nice outcome), but by getting and giving the most out of the whole experience. Bragging rights are one thing, but inspiring others to give the best of themselves to experience true joy is another level of winning altogether.

Earlier this week I received an interesting email, which at first I believed to be a hoax. The email said "Congratulations Adam Hill. You have qualified for the Olympic-Distance race at the 2014 USA Triathlon Age Group National Championship." Turns out it is not a hoax. Since the Long Beach Triathlon was a sanctioned USAT event, and I finished in the top 10% of my age group, I qualified for the Nationals, to be held in August 2014 in Milwaukee, WI. My immediate reaction was to think of how cool this was, and how far I had come in such a short time. Last February I was scarfing down donuts and playing Call of Duty, and less than a year later I have been invited to compete with Olympic-level triathletes. That's pretty cool! 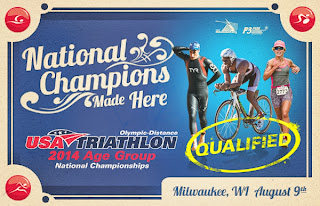 My second thought began to focus on the "what ifs". This was a trajectory that was not even on my radar until I had opened the email. But now I was considering that I had a shot at making Team USA and competing in the world championships. Perhaps even becoming an Olympian myself! A goal far removed from Ironman training.

See how quickly my mind veers off course from where my heart and spirit are guiding me? My ego takes hold and I am already winning races I never even knew existed until moments earlier. I want to do well in these races, but I want it to be a reflection of my training as well as success in practicing humility, acceptance, and patience. A balance, but one which is becoming more and more apparent in many aspects of life. It is good practice within the arena of triathlon.

This race is still something I am deeply considering, but not because I desire to win (to be in contention for a team slot, I would not only have to swim like a dolphin, but bike consistently at a 25 mph pace and run at nearly 6 minutes per mile for the course of the race), but simply because I would love the experience. How often can one say they had the opportunity to race in such an event? I'll keep you posted, but if you want to weigh in on what you think I should do, I would much appreciate it (just bear in mind that I will be racing in an Ironman two weeks prior to this event).

Speaking of championship events, be sure to check out the Ironman website this week, as they are ramping up to the Ironman World Championships in Kona, Hawaii this Saturday. If you have some time, check out the live coverage. Some of the most inspirational moments will be seen at the finish line. Ali'i Drive has been crossed by many people overcoming their own hardships, demons, or limitations. It is truly the greatest finish line in all of sports. If you miss it on Saturday, make sure to check it out when NBC airs their coverage. You can also see last year's powerful coverage here.

As far as my training is concerned, I passed a couple other milestones recently. I actually biked to work, which was quite a jaunt of about 45 miles (San Clemente to Anaheim). This was my first ride through Santiago Canyon, and it's amazing what you miss despite living somewhere most of your life. I had never been back there, and it is absolutely beautiful. So beautiful in fact that I decided to ride through there again to get to visit my sister (San Clemente to Norco). This trip was tough. The Santa Ana winds were blowing, which were in my face the whole way, and there is a very steady uphill over the last half of the ride which I underestimated. Total climbing was over 4,000 ft, and it took me an hour longer than I expected. You can see my workout summary here with the elevation profile. I did snap some photos along the way, and once I arrived. I met my wife and kids there so we could ride some horses... Well, my wife and kids anyway. I had enough saddle time.