This past weekend I had the rare privilege of not just racing in another sprint triathlon, but also getting to share the experience with my wife, who consequently was racing her first triathlon. This was super cool because I could really relate to those feelings of anticipation and anxiety as we led up to the race. I wasn't really nervous for me, but more so nervous for her. Would she like it? Is she going to be okay? Will she pass me on the bike? All of these things reminded me to let it go to God, and stop trying to control the world.


Since this was my first sprint in a while, and I haven't really had a chance to test my speed in a long time, my goal was to swim as fast as I could, bike as fast as I could, and run as fast as I could while still maintaining good form. As far as time goals were concerned, it is usually a high benchmark to set to run a sprint in under an hour, so I assumed I would be somewhere just over an hour. I wasn't certain how fast I would bike, maybe 22-23 mph, and I wanted to try to hold a 6:45 pace (something I thought would be achievable with the right kind of mindset). In other words, run as fast as I can until I feel like puking. More on that later.

The swim took place in Mission Bay, which, if we can trust the film "Jaws 3", is prime feeding grounds for man-eating Great White Sharks. But that's ok, because with Sea World fully operational next door, we would have Shamu and Dennis Quaid to save us from these killers.

Unfortunately we didn't get much of a warm up, since the warm up swim area was full of sea grass and knee deep soft mud. We opted instead to do a quick jog to the start area, where I got in the water with a number of other green-capped 30-34 year olds. This would be the last race I would ever be in this category, since I will be turning 35 at the end of this month. It's kind of strange how I raced Cabo in the 35-39 age group, and was held back for this one.

My intention was to see what the race would be like from the very front of the swim pack. I wanted to see if I could actually hang with the "fish" in the group. This would be a good opportunity to try it out, since the swim was only a quarter mile, so if I was beat up it wouldn't be for very long. I was just hoping to hang in there as long as I could. At first it was all going to plan, I was able to line up appropriately. When the horn sounded I aggressively starting flailing to make room for myself (unsuccessfully). Really within the front group it wasn't "swimming" as much as it was finding whatever bit of leverage you could to push yourself forward. Unfortunately for me, I was most often the bit of leverage that people were using. I was quickly dropped by the fastest swimmers and left in a group of middle of packers.

Very quickly I found myself overexerted from pushing too hard at the start, so I slowed it down a bit to focus on form. But I wasn't able to find any lanes to really have any kind of good form. It was around the first buoy that I got kicked in the chin pretty hard by someone in front of me. I surrendered my position at that point, caught my breath, and then started back to swimming with good form. Finally I had some open space and felt like I was making forward progress. What I learned from this swim is that I definitely can't hang with the fast swimmers, and it only serves to wear me down significantly when I try. Best to stay in the middle of the pack on the swim, save my energy, and catch them on the bike and run.

Soon enough my fingers were dragging the serrated concrete floor of the boat launch area, which was today serving as a swim exit, which was my cue to stand up and start running. I felt very good at this point and even decided to sprint to see how fast I could make it into T1.

I would like to think I executed my transitions flawlessly for this race. I sprinted past a few people on my way to the bike while stripping my wetsuit. When I got to my bike, my helmet was easy to get on, and I was off.

On the bike the plan was simple: bike fast and stay safe. In other words, obey the laws of physics. Take turns easy and then start charging. This plan was executed very well. The bike course left the parking lot and followed Sea World Drive down to Fiesta Island where we would circumnavigate the island twice before coming back to the transition area. Getting out to the island I was passing a number of people, but once I was on the island I could open it up. I felt really great and was constantly passing people. I would look down at my watch and see that I was averaging consistently about 25 mph, which was great. I was also very impressed to see how well people were obeying the rules of the road so to speak, staying right if they were slower than the rest of the traffic.

Two laps went by very quick and then we returned to T2. When I saw a sign saying "600 feet to T2" I underestimated how far 600 feet actually is, as I got out of my shoes and began to soft pedal the rest of the way. It was farther than I expected. But I did the flying dismount and charged it to transition.

Once again, I attempted to get through transition as quickly as possible and did so with great success.

Oddly enough, I was most nervous about the run. As I mentioned above I hadn't tested my speed for a long time, and I was afraid I would be demoralized if I didn't go as fast as I wanted to. My goal was a 6:45 pace, and as I exited transition I looked at my watch and saw that I was in the high 5's. While I was feeling really good, I dropped it back a bit, since I saw my heart rate was into the high 160's. As I ran, I continued to pass a few people, but didn't see anyone in my age group. The only people I saw were people from the relay who started well before us. This started giving me a strange sensation I haven't had before in any other race. "Could I actually be winning?" The mind can play tricks on us when adrenaline is pumping, and when you're susceptible to fits of egocentrism, it can become amplified.

For the course of the run, I maintained this thinking, as I didn't see anyone in my age group, and I know I had a fast bike split. However, as I approached mile 3, and was still ticking off 6:30 miles, I did begin to see a couple people in my age group. I passed two of them around mile 3, at which point I picked up the pace and started running a mid 5 pace. Unfortunately it wasn't enough as I couldn't pass another in my age group, and one of the people I had passed had re-passed me.

As I crossed the finish line in full sprint, I felt the urge to puke coming up. In fact, at the finish line, in front of all the crowd of people, it took every fiber of my being to hold it in. Fortunately I did, and that was the indication that I had given it everything I had.

Crossing the finish line, I went from feeling like I was winning to being in at least 3rd place. But that bothered me very little since I set out to see what I could do and I achieved at least 2/3 of it. While my swim is still lacking, I think I really performed well on the bike, and exceeded my expectations on the run. Furthermore, I achieved something that many sprint triathletes set as a benchmark goal, which is to finish in under an hour. I finished in 58:53.

While recovering in the finish area I had the opportunity to do something I hardly ever get to do at these races. Be a supportive spectator. It was really inspiring watching all of the people cross the finish line, and actually see their faces as they did so. To witness that moment when all the training, and pain, and challenge culminates into one moment of accomplishment is an amazing experience. And then, to actually be there and see it when my wife crossed the finish line was heartwarming. How fortunate was I to be able to finish my race and then see my wife finish her first triathlon?

In looking at the results, I was surprised to see that I had finished in 7th place in my age group, 35th overall out of 730 competitors. The year before only two people in my age group had finished in under an hour, but this year the fast people came out to race. Looking more closely at the results, I could see that 3rd-7th place all finished within one minute of each other. I was within a minute of being on a podium!

While that statement can be interpreted in a couple of different ways, frustration or joy, I intend for it to be reflected as joy. While I was so close to getting there, I recognize that I've been steadily improving for the last year, and I was very close to achieving something I never thought possible. I've never been fast. In fact the only thing I've ever done fast is finish a beer and replace it with another full one. I would have never thought I could come that close. I was reminded today that I need to keep my ego in check. I almost forgot the purpose for why I'm doing this. It's not about how I do compared to other people, but how I go about doing it, and how I can improve myself. While I was very close to getting a podium, I was also very close to letting my ego take control. I'm glad that I was reminded through witnessing the experiences of others, including my wife, of what's more important.

Speaking of my wife, she ended up finishing in 1:19, good enough for 20th place in her age group. Fantastic for a first attempt! I am incredibly proud of her for achieving this with such success. 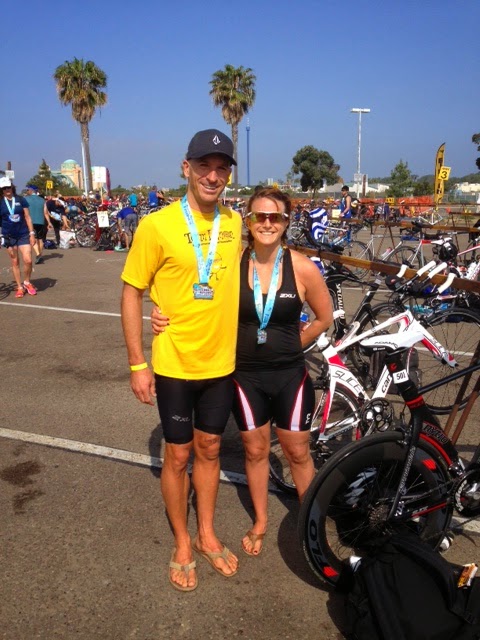