Leading up to an out of town race, a lot of the concerns that arise are related to the "unknowns". This is especially true of Ironman Boulder, where the uncertainties of the affects of altitude hang heavy on my mind. Having only been to this area once, and having gone there when I was much more unhealthy than I am now, I remember gasping for air at every climb of the stairs and feeling generally exhausted throughout the whole trip. Needless to say, this had me nervous about trying conquer 2.4 miles of open water swimming, 112 miles of cycling, and a full marathon. On top of that, my only impressions of the course were the 2D images provided courtesy of Google Earth, which never do any justice to hills, heat, or wind.

I've been less worried about the hills, heat, and wind due to my recent experience at Ironman Los Cabos. No longer were these variables "unknown" to me, and so I knew that I could at least overcome them. The altitude, however, was still a bit scary. If only there was some way to get some experience on the course, to see how the altitude would affect me during the swim, bike, and run, and how I might better prepare to face on these effects.

Enter the MarkAllenOnline Boulder Triathlon Training Camp. Coach Luis Vargas hosts this camp every year as a means to give athletes an opportunity to work up close and personal with a word class triathlete, and coach of world champion triathletes. This year, the added incentive was that the camp would help athletes to prepare for Ironman Boulder, which would take place 5 weeks after the camp. The timing could not be more perfect. I jumped at the opportunity to attend and hopefully quell my fears.

The trip itself was a great opportunity to meet some new and like minded people with varying hopes and expectations regarding their respective events. While in most triathlon clubs you have a variety of skill levels and people training for different events, this camp was specifically geared for iron distance races, thus everyone was somewhat on the same wavelength. Furthermore, everyone had a great story, and I really enjoyed being inspired by everyone's individual journey.

Luis' training over the weekend was fantastic as well. In addition to experiencing the course first hand, we had lectures where Luis shared valuable insight and experience from his years as a Ironman triathlete, and his knowledge about racing at altitude. Having this setting to learn from his experience was priceless. I would highly recommend this camp for anyone wishing to get to the next level in Ironman, or simply to meet and train with some great people.

The bike training was my first introduction to training at altitude, and it was a "head first" introduction. The morning after I arrived in Boulder, we would take on the entire 112 mile bike course. I would very quickly get to experience how going from 0 to 5,000 feet would affect me. Fortunately the pace was not fast, rather it was rather leisurely throughout the first half. I was expecting a noticeable spike in heart rate, but that was not the case. In fact, my heart rate was in a very comfortable 110 - 130 range all day. I even felt as if I was able to go faster with the thinner air, but I certainly didn't feel any effects of the altitude playing a factor on my ride.

While the altitude wasn't much of a factor on the bike, the weather itself proved less forgiving. The majority of the ride (as demonstrated by the photos below) was absolutely perfect. But about 70 miles into the ride a storm descended on us rather abruptly. Large hailstones and lightning was all around us. Fortunately, Luis had a trailer in which we were able to hunker down for the half hour the storm was upon us. The very next day riders reported winds gusting at 60 mph, thus making the course more challenging. This was demonstrative of how the weather can change abruptly on this course. 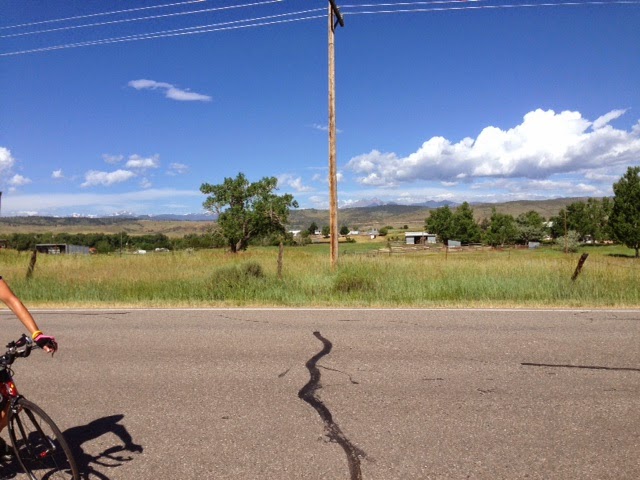 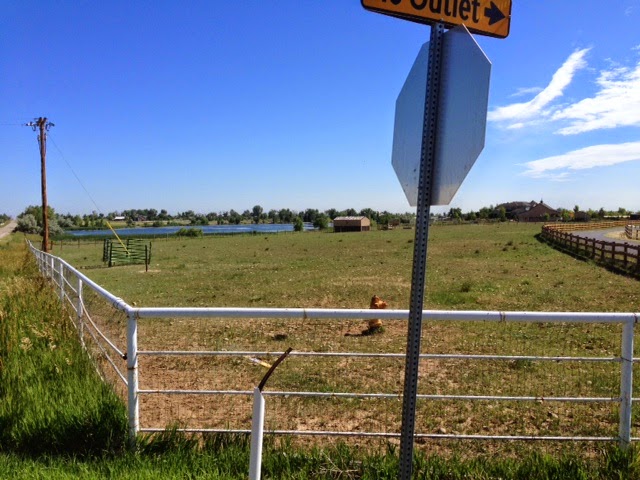 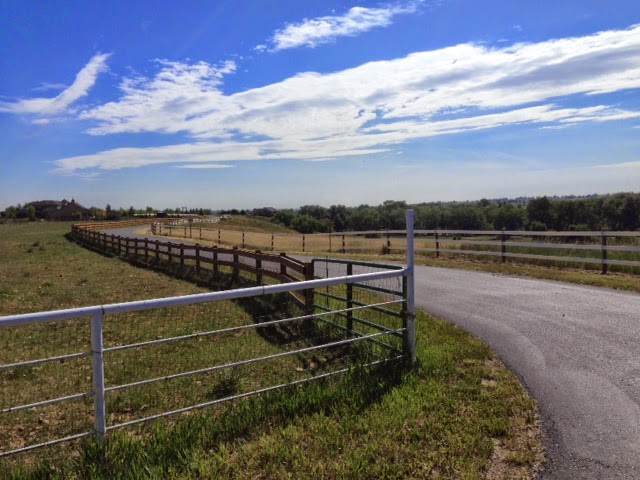 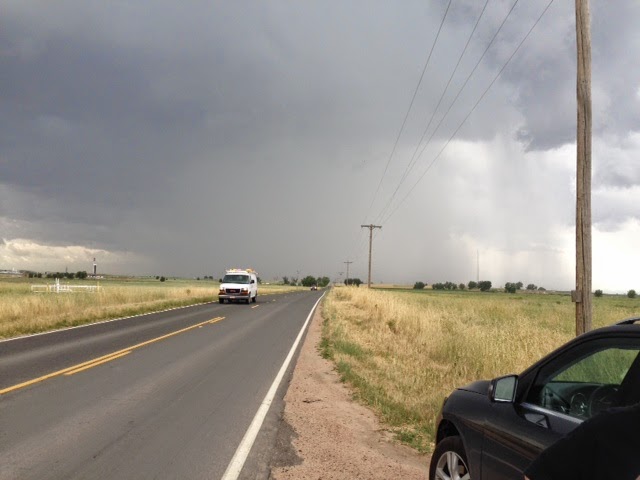 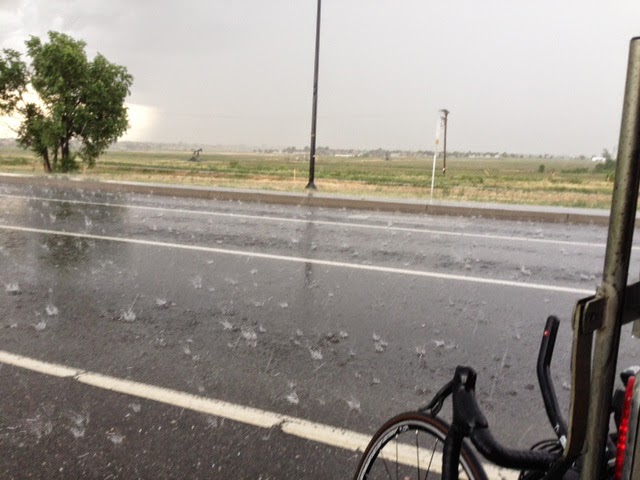 Riding the course early gave me a chance to think about race strategy as well. Since the course has a lot of false flats and straights, the impulse will be to go out hard and fast. However, since the first 30 miles is where most of the "hills" are located, it will be best to take it easy at the beginning, and then build throughout the ride, paying close attention to the fact that there will still be some climbing in the last 15 miles of the course (oh, and a marathon too).

Noticeably my weakest sport, and one which I need the most work, still I wasn't necessarily too concerned about how the altitude would affect my swim. That is, until we got into the reservoir to practice the second morning of our trip. The wind started blowing pretty early, and created a bit of chop in the water, but nothing I don't often see in other open water swims. This swim, however, I was having a really hard time finding a rhythm. I felt like I couldn't get a full breath in, and consequently, I started panicking a bit. I completed one 600 yard lap feeling a little uneasy, but halfway into the second lap is where I began feeling panicky. Rather than try to complete the loop (as the buoy became dislodged and began to drift in the wind) I decided to call it a swim and get toward shore.

I felt quite defeated after this swim, and a little embarrassed, however, Luis got us into the pool later on to do some drills. I was able to get through the workout, but felt more winded than ever. Demoralized, I went back to considering my race strategy, specifically my swim time and pace.

I was dreading the next day's swim. Luis said that he was going to work us hard in the pool, and after the previous day's performance, it wouldn't be pretty. Fortunately, a little more volume and a bit of a challenge was all I needed to regain my confidence. He had me in a lane with faster swimmers, which forced me to push the pace, but it also helped me to work through my issues with rhythm. That and the technique drills were most helpful in giving me a way to improve my swim over time. All this swim work at altitude gave me a good amount of confidence for the Ironman swim, and made me realize that I will need some daily swim training when I arrive for the race 10 days early.

I had a three hour run scheduled for this week, so I planned on doing it on the Ironman Boulder course. The course runs right along a shaded creek path, which makes it a little cooler than the expected "exposed" temperature we'll get on the bike. The only exception is the Easternmost part of the course which leaves the creek and is unprotected from the sun. The Northeast section has a bit of a climb which we'll have to hit twice on each loop. Unfortunately, this will happen around miles 18-19, which is where I melted down in Cabo. Not to promote a self-fulfilling prophesy, but a meltdown here would not be fun.

The altitude affected me slightly on the run, but not significantly. I was about 20-30 seconds off my pace, but it felt more due to lethargy (from a 8 hour bike ride the previous day and excessive travel) than altitude. Furthermore, the run was all on paved concrete, which played terribly on my calves. After 20 miles, I was in quite a bit of pain and had to slow significantly to avoid injuring myself.

It's not a hilly course, but there are a few punchy sections, specifically some of the bridges and overpasses, which will chew up the legs quite a bit. But the important realization was that the East to West portion of the course is a false flat (naturally, since the river flows Eastward). It will be necessary to pace myself heading West, but the pace can increase pretty significantly going East.

All and all a great trip and camp, which provided a lot of insight and confidence for race day. Today I feel as prepared as I will every be for this race, and am excited to experience the joy not only myself, but through the others that I met who will be experiencing this as well. A big thanks to Luis Vargas for a great experience.
Posted by Unknown at 4:26 PM